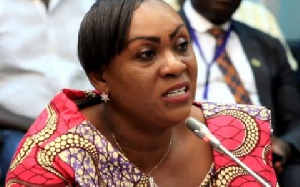 The Awutu Senya East National Democratic Congress (NDC) has issued a two-week ultimatum to both the Police Service and Member of Parliament for the constituency, Mavis Hawa Koomson, to fill them in on a resolution outcome taken after the incident.

According the Constituency’s NDC team, necessary steps would be taken against the MP for causing mayhem during the registration exercise for a new voters register two months ago, if no solution has been derived so far.

According to the Constituency Secretary, Amadu Tuariq, the party also wants to know when the MP will replace the burnt motorbikes as well as give back their member’s mobile phone that was confiscated for recording the scene.

Labelling the media as torchbearers of the society, Mr Tuariq said “help us find out from his outfit (IGP), as to when the Hon. MP for this area, Mrs Mavis Hawa Koomson who led the hoodlum to burn the motorbikes and also seize the phone of Mr Adu will provide the items to the affected people. We are by this press conference, giving the Police and the Hon. MP two weeks’ ultimatum to respond favourably”.

“It will be recalled that on 20th July 2020 at about 8:47 am, some alleged hoodlums of the NPP here in the Awutu Senya East constituency in the company of their MP, Mrs Hawa Koomson, and the campaign manager, Mr Anim who also doubles as the deputy CEO for the Coastal Development Authority stormed the Steps to Christ Registration Center, fired gun shoots and burnt 3 motorbikes belonging to one of the party agent, Edmond M. Morttey and two of our other members, Paul Obaku and Farouk Issaka who had gone there to guarantee for some relatives.”

Touching on the burnt motorbikes, Mr Tuariq stated that his members are grieving as the destroyed items served as the source of livelihoods for these affected persons.

“There was also a case of Mr Adu Hayford, who had his phone confiscated by the orders of the Hon. MP for recording the scene. The three individuals after lodging complaints with the Kasoa District Police, we have not heard anything yet. The motorbikes served as their only means of transportation and also as their source of livelihood,” he added.

Mavis Hawa Koomson was invited by the police for questioning on July 24, 2020, after she admitted firing warning shots at a polling centre in her constituency.

According to her, the gunshots were fired to protect her life which she averred was under threat by some thugs alleged to be affiliated to the opposition NDC.

Despite her justification, the minister received several condemnations from both the public and Civil Society Organisation (CSOs) to resign for engaging in the act.

The Police are however investigating the case for the necessary actions to be taken.