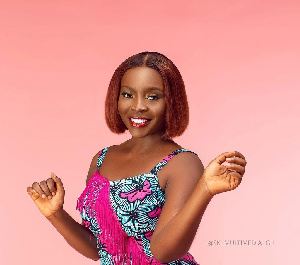 Ghanaian-English born Radio and Television personality, Nana Adwoa Bonsu Sarkodie-Mensah simply known as Nana Adwoa Sarkodie, has been announced as the official host of the newly outdoored Christian reality television show which airs every Sunday at 4pm on TV3 dubbed “Church And Gifted”. Since the debut episode, the young articulate Journalist, presenter and producer lit the show up with her years of experience on TV and Radio.

The ground breaking show features an array of talents from singers, dancers, miming artiste, among others who are being equipped with the requisite talent business knowledge, industry insights and support to transform them into global stars. Each week comes with a theme where talents are given the opportunity to explore their gifts in the field of hip pop, contemporary gospel, praise, others. The winner of the show walks away with Ghs 10,000, record deal and other execiting prizes.

Born on the 10th of October, Nana Adwoa Sarkodie is a prolific inspirational speaker, amazing Corporate MC, presenter, producer and entrepreneur who is blazing trails in the fields of Media, Film and Motivational Speaking. She grew up in the United Kingdom where she had the most part of her education.

As an enthusiastic young lady, Nana Adwoa mostly combined school with work throughout her stay in London. Between 2008 to 2012, she worked as a Producer and Presenter at OBE TV, one of the first African Television networks set up in the UK.

In February 2012, she picked up the position of Marketing Associate at Vox Africa TV where she played a major role in business development and forming advertising leads. Despite only working at Vox Africa TV on a part time basis, she managed to pull in the most accounts and brought in the most revenue.

Nana Adwoa decided to wade back into the waters of TV once again, only this time moving to her homeland Ghana where she joined Metro Television as a Presenter / Producer from 2015 to 2017. She later joined the Citi family thus Citi TV & Citi FM from August 2017 until May 2020 where she presented and produced an array of shows including Sister Sister, Traffic Avenue, Entertainment Highlight, Saturday Live and 20/20 News.

At age 31, she became the CEO and Founder of Chopbox by Nas, a wholesome grocery packaging company providing students across the country with their basic needs. She also founded The Word By Nas, an inspirational media agency set up to imbibe great Christian values and teachings among young people especially in this era of social media nuisance.