It is also reported that Trump threatens to release a tape from the interview with Lesley Stahl before its scheduled broadcast on Sunday, though a representative of the White House denies the claims.

AceShowbiz –
President Donald Trump is back with his antics. POTUS had a solo interview with CBS News’ “60 Minutes” with host Lesley Stahl on Tuesday, October 20 when he abruptly ended the interview. He didn’t return despite being tapped to film a joint interview with Vice President Mike Pence.

According to reports, POTUS cut short the interview, which took place at the White House, only 45 minutes into the interview that will be scheduled to air on Sunday. He allegedly told the crew that he believed they had enough material to use for their program.

It was also said that Trump threatened to release a tape from the interview before its scheduled broadcast. Of the report, a representative of the White House claimed that “the White House had agreed they were taping the interview for archival purposes only.” Meanwhile, CBS News has yet to comment on the matter.

Trump himself took to his Twitter account on Tuesday to address the matter. “I am pleased to inform you that, for the sake of accuracy in reporting, I am considering posting my interview with Lesley Stahl of 60 Minutes, PRIOR TO AIRTIME! This will be done so that everybody can get a glimpse of what a FAKE and BIASED interview is all about…,” he tweeted.

He went on to say in a separate post, “….Everyone should compare this terrible Electoral Intrusion with the recent interviews of Sleepy Joe Biden!” 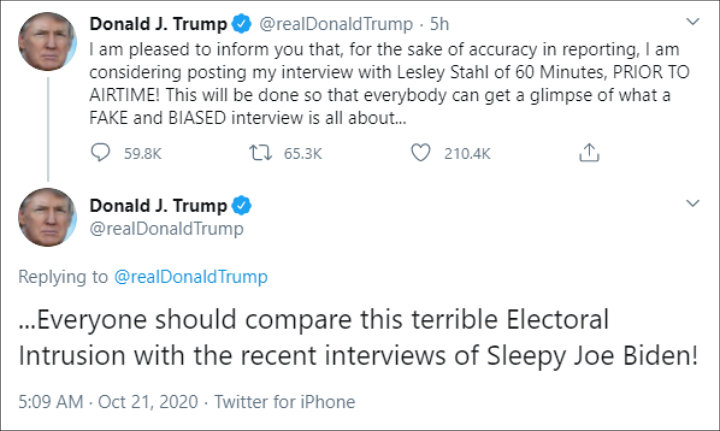 He also launched a personal attack on Stahl in a Twitter post. Sharing a video of her at the White House, Trump captioned it, “Lesley Stahl of 60 Minutes not wearing a mask in the White House after her interview with me. Much more to come.” 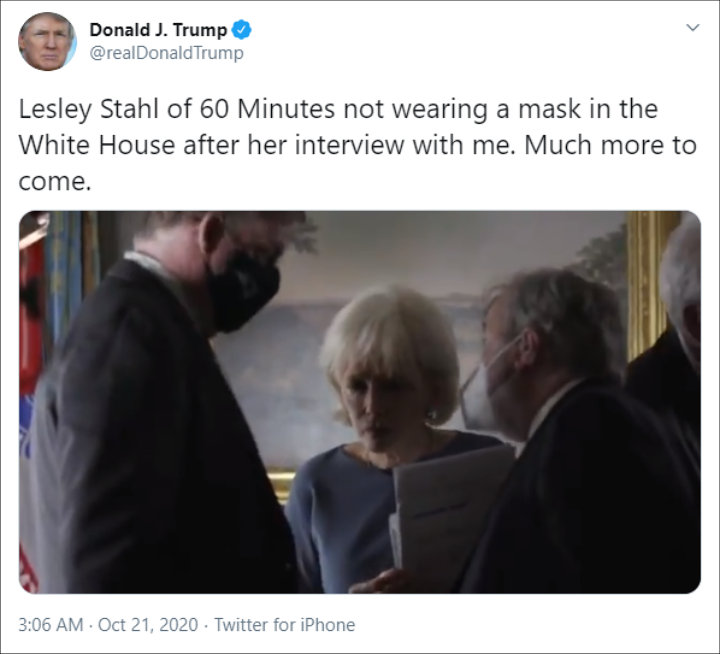 A source, however, defended Stahl, saying that she wore a mask while she was talking with Trump and Pence and that the clip that the president shared was taken right after the interview. She was speaking with members of her crew who tested negative for COVID-19.


Jamie Lynn Spears Recalls Being Forced to Audition for ‘Twilight’: ‘That Is So Stupid’