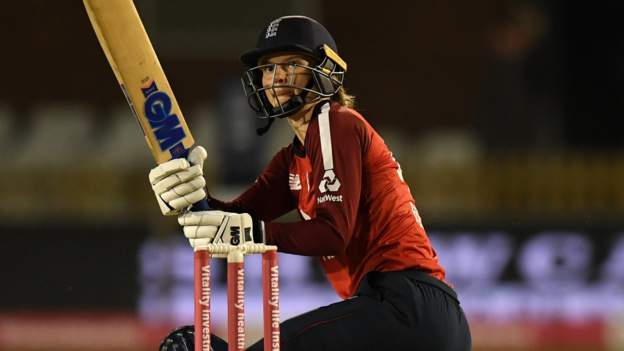 Amy Jones helped England to another dominant victory over West Indies as they claimed a 44-run win in the fourth Twenty20 at Derby.

West Indies lost Deandra Dottin to their third ball and slumped to 67-5.

This was England’s most aggressive performance with the bat so far, striking 19 fours and five sixes against an increasingly ragged West Indies attack.

It will take something special from West Indies to avoid being whitewashed in the series when the final match takes place at the same ground on Wednesday at 18:00 BST.

Jones & Knight to the rescue

This was England’s highest total of the series but a competitive score looked far from certain at the halfway stage.

A fine opening spell from all-rounder Aaliyah Alleyne saw Danni Wyatt and Nat Sciver caught behind – Wyatt for a four-ball duck – before Tammy Beaumont’s strong start was ended as she was trapped lbw by off-spinner Karishma Ramharack for 27.

Jones was dropped on two, Lee-Ann Kirby putting down a sitter at mid-wicket, but she and Knight were tied down before Shabika Gajnabi entered the attack. Her sole over disappeared for 17 runs, Knight swatting her third ball for six, and West Indies faltered.

Knight was exasperated when she was caught behind but Jones continued the attack. Her 30-ball half-century contained just five dot balls, compared to five fours and two sixes, and she was particularly strong against the spinners.

She showed innovation, ramping and reverse-sweeping where she could, and was complemented by Brunt, who smashed an unbeaten 25 from 17 balls to ensure England finished strongly.

West Indies have shuffled their line-up and made changes to their team in every match but they have still not put in a convincing batting performance.

Brunt bowled Dottin, the only West Indies batter to make an impact on the series, and the rest felt inevitable.

Kirby’s poor series continued when she inside-edged Sciver on to her stumps, Shemaine Campbelle was lbw to Sophie Ecclestone and Taylor was bowled trying to cut Glenn as West Indies faded.

With all their bowlers chipping in, the only disappointment for England will be their catching. Jones again dropped two high chances and Sciver spilled a similar chance off Anya Shrubsole midway through the innings.

This series has shown the disparity between the domestic and international set-ups between the two teams – the England players were able to feature in the Rachael Heyhoe Flint Trophy, while their opponents have not played any regional cricket since April 2019.

West Indies have lacked the ruthlessness shown by England when they get themselves into a good position. There have been positives with the ball but their batting is lacking.