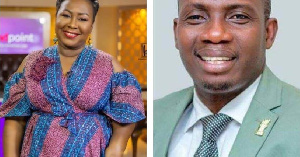 If you would recall, the host of The Standpoint stated that she personally stopped the controversial counsellor from appearing on her show about four years ago.

She made this comment after Counsellor Lutterodt was lambasted for saying rape victims enjoy the act to a certain extent.

Months after the issue has even died out, Counsellor Lutterodt in a discussion with Accra FM’s Nana Romeo sighted by Zionfelix.net disclosed that he was pained following the popular television presenter’s remark.

Due to this, Counsellor Lutterdot averred he went to his mother’s grave and asked her to listen to what Gifty has said.

According to him, he was shocked and he did not expect such comment from a woman of her calibre to do the same thing that young folks were doing.

Counsellor Lutterodt mentioned how he admired, talked, worked and did everything with Gifty Anti.

He shockingly revealed how the dead body, the morgue and cemetery motivates him.