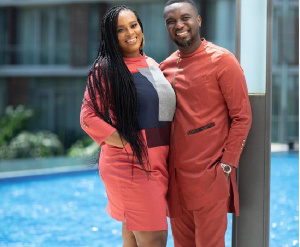 Gospel Musician, Joe Mettle has for the first time opened up about reports that suggested his wife was pregnant and that forced him to marry her.

There were reports that Joe Mettle and his wife rushed their marriage in order to avoid shame on the musician who is a role model to a number of young people in the Ministry of God.

But speaking in an interview with Zionfelix, Joe Mettle indicated that those reports were lies and figments of the reporter’s imagination.

“I don’t know they are saying it. You want me to say yes or no? Whatever story is out there is not true. Keep playing. I’m the one who is supposed to be out there and not my wife. She makes the decision to want to be out there and if she is not ready to do that I cannot decide for her.”

On the question that he led other ladies on and ditched them for his wife, Joe Mettle denied leading on any lady.