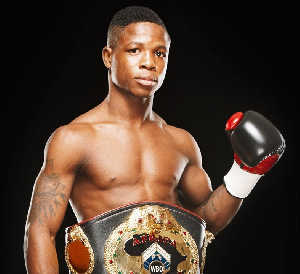 Boxer Duke Micah has been urged to go for the kill when he takes on Philippine boxer Johnriel Casimero in a WBO Bantamweight title contest.

Micah will have a shot at a world title when he battles Casimero on Saturday in the United States.

Discussing Micah’s chances in an interview with www.ghanaweb.com ace boxing trainer Carl Lokko said that Micah has only two options heading into the fight.

These options, he says are either a knockout or a total dominance of nine of the twelve rounds.

He explained that while Duke Micah has a good chance against Casimero, the odds are slightly in favour of the Philippine because he is the titleholder.

Carl Lokko who has worked with most of Ghana’s recent world champions said that Micah can nullify those advantages by taking the fight to the boxer.

He urged him to be cautious of his punches but aim at finishing his opponent before the 12 round.

“He has matured for a world title and he has a chance of winning like his opponent. Apart from Casimero being the purse holder, he is also the champion so Duke will have to do extra work to push the champion backwards. That means he shouldn’t allow the champion to dominate the fight, other than that he will not get a good result.

“He should attack the guy. For him to win and win clear he should stop him or win eight to nine rounds clear. Knocking him out will be a straightforward result for Ghanaians and the boxer but anything shorter than that he has to dominate most of the rounds convincing. Casimero is a good boxer but very beatable”.

Carl Lokko is a member of the Ghana Boxing Authority which has already sent a goodwill message to Micah ahead of the bout.

“The Ghana Boxing Authority (GBA) wishes Duke Micah the very best in this crucial match title against the WBO Bantamweight champion JohnrielCasimero of the Philippines scheduled for coming Saturday, 26th day of September 2020 at the Mohegan Sun Casino, Uncasville, Connecticut, USA.
The GBA has been monitoring his level of training and has no doubt his capabilities to win the title is very high”.