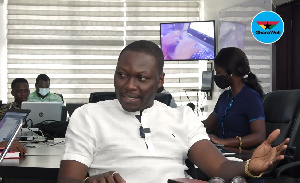 Entertainment pundit Arnold Asamoah Baidoo has descended heavily on a blogger who sought to create the impression that Abeiku Aggrey Santana was an unsuccessful media personality.

The blog had shared a photo that had Abeiku Santana, Osei Kwame Despite, Kennedy Osei, Dr Ofori Sarpong and another man.

The writer captioned the article: “Four successful men and the odd one – Abeiku Santana.”

His caption meant that the Okay FM presenter had achieved so little that he was not suitable to be in the photo with the others.

This unfortunate description of the radio presenter caused Asamoah Baidoo to take to his Facebook to school the blogger who, obviously, knew little or nothing about Abeiku Santana’s achievements or wealth.

I saw this picture on some blogs and unfortunately, some dullards managing these blogs tried to put a spin around the photo in a bid to generate impressions; likes and comments. One blog was bold enough to even call out Abeiku Santana as the unsuccessful one in the photo. They even called him rough-looking in the photo.

Another blog engineered an opinion poll, calling on its readers to pick the odd one out.

Interestingly, most of the followers picked Santana, calling him unsuccessful. Some unscrupulous fellas even lampooned his apparel – as an indication of he not being on the level of the others in the photo. I am here, still astounded and awe-stricken with the level of ignorance and exhibition of insanity.

Listen up, you dim-witted ignoramuses!

Abeiku Aggrey Santana is arguably, no, scrap any argument; he is the most successful media personality in the whole of Ghana. He’s seen it all, done it all and won it all – and still humble. That indefatigable gentleman has jaw-dropping properties splattered around the country.

Make no freaking mistake; the fact that they don’t show it and say it should not fool you.

But wait oo, you are on social media with 5-10Ghc bundled data, picking odd ones out: have you eaten? Have you paid that rent? Have you stopped picking trotro? Have you bought one cement bag before? Have you changed that ramshackle bed or that stinky bedsheet? Eeiii!