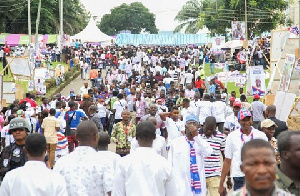 A former Deputy National Organizer of the largest opposition party, National Democratic Congress (NDC), has alluded that the members of the ruling New Patriotic Party (NPP) cannot differentiate between suspension and abrogation.

Mahdi Gibril has therefore explained that members of the NPP do not understand English Language hence their assertions that the NDC flagbearer has abrogated instead of suspended his campaign tour of the Bono Region.

The former president, John Dramani Mahama, who is also the NDC flagbearer, put on hold his tour of the Bono Region on Tuesday, September 22, 2020, and returned to Accra to ascertain why some names have allegedly been expunged from the newly compiled voter register.

But some members of the NPP, especially, the Bono Region Chairman, Kwame Baffoe, popularly known as ‘Abronye DC’, is alleging that the NDC flagbearer cut his tour, to avoid “disgrace” because he was unhappy with the turnout after his visit to Sunyani Odumasi on Sunday.

He said it is a prudent decision as he needs to get back to Accra to confront the EC to fix the anomalies witnessed in the voter exhibition process.

“A lot of people have their names missing from the registration data, the short code 1422 for verification is inaccurate and a whole lot.”

Mahdi Gibrill continued that members of the NPP don’t understand English and can’t make the difference between suspension and abrogation of campaign tour.

He emphasized that the only thing that interests members of the NPP is to read pornographic newspapers.

“Don’t they know the difference between suspension and cut? Their only interest is to read pornographic newspapers.”