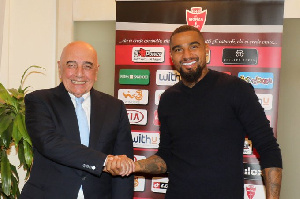 Boateng is the 11th new signing of this season for Monza

Serie B side Monza have officially signed Kevin-Prince Boateng from Fiorentina, reuniting him with ex-Milan leaders Silvio Berlusconi and Adriano Galliani.

After 30 years at Milan, President Berlusconi and his trusty CEO Galliani are building a new football dynasty at Monza, earning promotion from Serie C last term.

They are out-spending everyone in Serie B already, including the arrival of Boateng, who passed his medical today.

A statement confirms the Ghanaian signed a contract to June 2021, with option to extend for another year.

Boateng is the 11th new signing of this season for Monza and already played for the likes of Milan, Borussia Dortmund and Barcelona in his long career.

He’s also reunited with former Milan coach Cristian Brocchi, who is now at the helm for Monza.