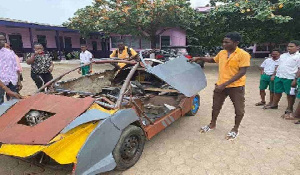 JHS graduate, Kelvin Odartei has manufactured his own car

The mother of an 18-year-old Junior High School (JHS) graduate, Kelvin Odartei, who manufactured his own car says she prophesized on her children while they were in her womb.

Madam Abigail Pabi said she wanted her children to be medical doctors but Kelvin and his siblings have taken to arts which to her, has been a blessing.

The 2020 Basic Education Certificate Examination (BECE) was climaxed with an exhibition of a car manufactured by the 18-year-old second son of Madam Pabi.

The innovation by this youngster has won the admiration of most people including renowned Ghanaian automobile manufacturing company, Kantanka, who revealed on their Facebook page they are in search for him.

Speaking on Onua FM’s Yen Sempa on Thursday hosted by Anaokyewaaba Serwaa, Madam Abigail Pabi said in Twi that “growing up, Kelvin used to cut the metals on my hall and it was hurting when you step on it”.

She said, “I had empty milk cans in my bedroom, kitchen and all that. I had prophesized on my children while they are in the womb so I knew he was going to be great”.

Madam Pabi said, “People in the neighbourhood thought he was insane because he was roaming on streets and dumping sites picking metals”.

Kelvin Odartey, the manufacturer said he has promised to “manufacture a car for my mother. I have told her already and I will do it”.

He said, “my mother use to beat me when I started. My mother told me to chew the mental at a point in time”.

Kelvin expressed gratitude to all those who have promised to help him, especially, the government through the Minister for Education.