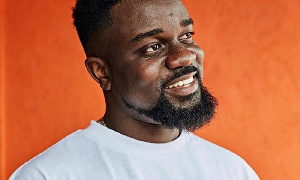 Just log on to any social media platform in the last two or three weeks and you would see at least one or two End SARS hashtagged posts.

It would be very had to miss them as young Nigerians were joined by many others around the world to fight for an end to senseless police brutality.

In all of that online noise, Ghanaian musician Sarkodie had virtually remained silent and had not publicly tweeted either in support of or against the protests.

It was only once on October 12 when Sarkodie quote tweeted a tweet from Oxlade which was a video of a man being abused by people believed to be Nigerian police officers.

“Sorry my brother,” he said. “We stand with you, it’s insane and inhumane what’s going on out there,” he added without using the End SARS hashtag but choosing to sign off the tweet with an emoji of the Nigerian flag.

After that it was back to his default settings of posting photos, reacting to non-SARS related tweets, among others.

However, all that changed hours ago when he tweeted what could count as his first official End SARS supportive tweet.

“It is really crazy what’s still going on out there in Nigeria. RIP to Lives lost and strength to those still fighting for justice… God b(e) with you,” he tweeted this time adding the End SARS hashtag.

It is really crazy what’s still going on out there in Nigeria ???????? … RIP to Lives lost and strength to those still fighting for justice… God b with you #EndSARS