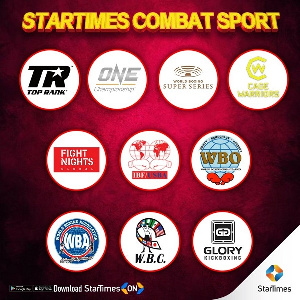 Top Rank stands as one of the world’s premiere boxing promotions. For nearly half a century, Top Rank has produced some of boxing most exciting bout and Top Rank’s current stable of champions represents the best the sport has to offer: Vasiliy Lomachenko, Terence Crawford, Oscar Valdez, Gilberto Ramirez, Jose Ramirez and Tyson Fury.

Top Rank is joining a long list of premium combat sport events broadcast on the StarTimes channels. These events include top boxing bouts held by WBO, WBA, and WBC and IBF as well as several mixed martial arts (MMA) competitions.

Cage Warriors is Europe’s leading and longest-running mixed martial arts promotion. It is the sport’s fastest-growing organization and has been home to some of biggest stars of MMA’s past and present, including Conor McGregor.

One Championship is the leading Asian MMA event, quickly becoming a global powerhouse. Today, the very best fighting talents and prospects in Asia ply their trade in the fabled ONE cage, including 10 World Champions that represent the very pinnacle of the game. This includes global superstar athletes such as Angela Lee, Bibiano Fernandes, Eduard Folayang, Ben Askren, and Brandon Vera.

Fight Nights Global (FNG) is a Russian mixed martial arts organization that previously hosted K-1 and other martial arts events. It features the top-ranking fighters of the sport. The company’s shows featured Fedor Emelianenko, Batu Khasikov and many other eminent mixed martial artists.

Last but not least, the World Boxing Super Series (WBSS) is an annual boxing tournament and brings the ‘best of the best’ fighters together to compete at venues around the world for the Muhammad Ali Trophy, named in honor of the “Greatest of all time”, Muhammad Ali.

Combat sports are among the most popular sports in Africa and we looking to give the best experience to our subscribers. To this end, we will continue to enlarge our portfolio with premium events such as Top Rank’s.”

All these events are broadcast on the ST Sports Arena channel number 241 as well as on the other sport channels exclusive to StarTimes.