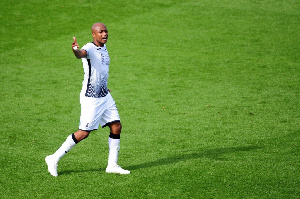 Ghanaian attacker Andre Ayew has been named in the EFL Team of The Week following his match-winning performance for Swansea against Wycombe.

Ayew scored and assisted as Swansea City beat Wycombe 2-0 on the road in the English Championship over the Weekend.

The Black Stars captain opened his season’s account when he fired in his side’s first goal of the match.

Ayew scored inside the first 15 minutes after he was set up by team-mate Jake Bidwell.

In rewarding players for their output during the weekend, the EFL put together a Team of The Week with Ayew getting selected.

Here’s your EFL Team of the Week!