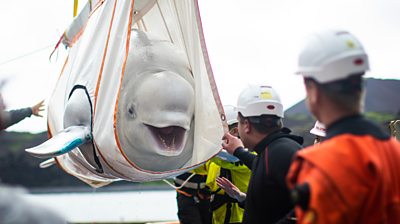 Two beluga whales have had their first swim in open waters after being held captive in a park in China.

The whales were moved to a sanctuary off the Westman Islands in Iceland back in August and have been acclimatising since then.

They are thought to be the first two captive balugas to move to an open water sanctuary.

It is unlikely they will ever be able to fully return to the wild.