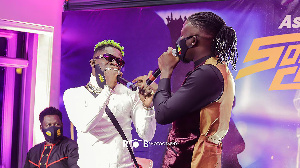 The show which was first of its kind and organized by Asaase Radio was designed to make the two Dancehall heavyweights in Ghana battle each other lyrically on a live stage to show who wields much supremacy and to put to bed who deservedly has to be called the Dancehall King.

However, fans were hugely disappointed when the show reached an anticlimax after the SM boss stormed out of the place in anger when it got to the segment where they had to lyrically outdo each other.

He, however, maintained that they still have a friendly relationship.